We Brits love a good barbecue – there’s no denying that.  Every summer, the shirts come off, the grills come out (the Lotus Grills if you want the perfect burgers), and we get the neighbours together for that quintessentially British garden party.  However, for those of you who read our previous post on the history of the barbeque, you’ll know that barbecue is more of an American tradition – adopted from the Spanish who, in turn, adopted it from Caribbean natives during the Age of Discovery!  But we already know about these – but the barbecue tradition (no matter what name it goes by) isn’t just limited to this handful of nations.  Here are some of the more unusual countries who love a barbecue just as much as we do! 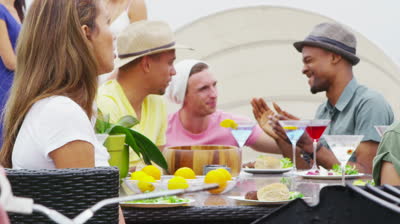 Did you think the Land of the Rising Sun was all sushi and rice balls?  Think again!  “Yakiniku” – meaning “grilled meat” – is a Japanese tradition equally as sacred as the Great British banger roast, and the Japanese love a beer just as much as we Brits!  Beef is the traditional choice for yakiniku, but there are no “official” rules – pork, chicken, offal and, of course, seafood have all been known to thrown onto the grill.  In fact, so popular is yakiniku in Japan, that the All Japan Yakiniku Association (which is actually a thing) declared – in 1993 – that the 29th of August should be National Yakiniku Day!

What with the country being split in two – a North and a South who like to have a bit of a ding-dong every now and then – and the recent J-Pop hit “Gangnam Style” becoming an international hit, Korea might be considered Japan’s noisy neighbour – a trait it arguably picked up from the Americans, who have had a massive influence on the country’s development (well, South Korea at least).  What the Koreans also share with the Americans is their love of barbecued ribs.  “Kalbi” is one of the most popular dishes of Korean “bulgogi” (the Korean barbecue which literally translates as “fire meat”), which often finds itself marinated in soy sauce.  If you ever find yourself in Korea, be sure to try the “maeun dwaeji galbi” – the “hot and spicy pork ribs”.  You’ll thank us! 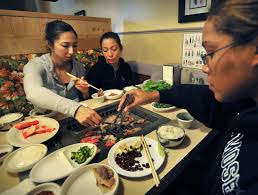 When we think of Mongolia, we think of vast, open fields and those tents that middle-class kids go to stay in on their gap years.  But due to their nomadic ancestors, the Mongolian barbecue tradition is perhaps just as ancient as the one that the Spanish nicked from the native Caribbean peoples.  Known as “khorkhog”, the Mongolian barbecue isn’t fuelled by charcoal, but by the heating of large stones over which things like lamb, goat and marmot are cooked.  Oh, but if you ever go to a “Mongolian barbecue” restaurant, there’s a good chance you’re not getting quite what you expected, since these generally use barbecue methods that originated in Taiwan!

Though Russia is often associated with the frozen wastelands of Siberia and having quite a controversial foreign policy, they actually have their own version of the shish kebab known as the “shashlyk”.  Now, we’re cheating a little bit here because there’s a good chance that this custom was adapted from Turkey and the Caucasus rather than from within Russia itself, but hey, we nicked it from the Americans, so why not?  Though we’ve heard rumours that Russian President Vladimir Putin likes to barbecue the bears that he kills… in hand-to-hand combat.

Switzerland and the French Alps

“Pierrade” takes a page out of the Mongolian guide to barbecuing, through the use of heated stones.  However, being very European, of course, pierrade isn’t a case of simply chucking a few bangers and burgers on a grill and slopping the results onto a bun.  Oh, no – the Franco-Swiss always need to outdo us.  Traditionally, pierrade  makes use of thinly-cut slices of meat, served with a whole load of fancy sauce and veg, tending to go hand-in-hand with other traditional forms of cuisine like fondue.  Ooh-la-la.

So that’s our guide to perhaps some of the lesser-known countries who love a barbecue just as much as we Brits do, and with barbecue season coming up, it might be worth looking into what these places have to offer!  If you’re safe in your bangers-and-burgers comfort zone, then don’t worry about it!  But why not mix it up a bit and throw some shashlyk or maeun dwaeji galbi on your grill?  Or if you’ve ever been to a country which might surprise us with its barbecue culture, let us know all about it in the comments below!