As the sun starts to come out and back gardens and local parks fill up with crowds for that ancient, beef-grilling ritual of barbecuing, we thought it would be appropriate to take a look back at some of the most notable and interesting achievements in barbecuing throughout history!  So here’s our time-transcending tour of barbequing through the ages!  Hope you’re hungry!

The embers that sparked the fire

Cooking meat with fire is nothing new.  In fact, one might say it’s one of the least new things in human existence!  When one thinks of a caveman, one instantly imagines a large, solitary and brooding figure sat alone by the fire, roasting a rack of ribs from his latest kill.  But in fact, that wasn’t the case!  Since you came into existence, humans have always been very social creatures; there’s evidence that early cavemen – far from being solitary nomads – tribal, and even joked and laughed while eating together!  So not much has changed, really – especially now that facial hair is making a comeback.

Origins of the traditional barbecue

But you may be wondering, where did the word “barbecue” come from?  After all, it’s a pretty strange word, and really hard to spell (which is why people normally just write “BBQ”).  Well, most etymologists agree that it comes from the word “barbacoa”, which made its way into Western languages in the early 1500s when Spanish Conquistadors went to explore the New World.  The word is thought to originate from the native Taíno people of the Caribbean, whose word “barabicu” meant “sacred fire pit”, and described a wooden platform on which meat was cooked.  The word “barbacoa” continued to – and still exists – to this day, and applies specifically to meat cooked over a pit – closer to what one might imagine the Taíno people did.  Although the word tends to be used in places like Mexico referring to the grilling of a head of beef, the barbacoa culture has also spread north of the border into southern US states like Texas. 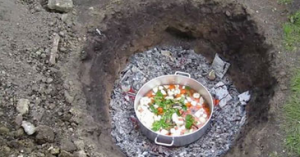 By the 19th century, the New World was all very-much discovered, explored, and settled, by droves of Europeans all looking to start a new life in America.  Perhaps due to its proximity with Latin America, where Mexican barbacoa had continued the Taíno tradition, barbecue because a big tradition in the southern states.

However, while barbacoa dealt traditionally with the cooking of beef, the southern US was better-known for its large abundance of pig farms.  Because of this, the “barbacoa” tradition was adapted for the cooking of pork, and corn bread emerged as a side dish due to the humid conditions producing a large yield of corn.  By the late 1800s, barbecue had spread all across America, with each state boasting their own unique grilled cuisine; this has largely continued to this very day.

Zwoyer and the charcoal briquette

1897 was the year in which the barbecue “as we know it” came to be.  Ellsworth B. A. Zwoyer – an acquaintance of Henry Ford and Thomas Edison – patented the first charcoal briquette – that’s the “chimney”-like traditional barbecue, usually made of brick, where meat is broiled on a gauze above the structure where the smoke escapes.  Many gardens and even public places have charcoal briquettes installed today, and they are the origin of all modern barbecue grills!

Since Zwoyer’s invention, barbecue has become a worldwide phenomenon, working its way uniquely into hundreds of different cultures all across the planet.  What’s more, each and every country is proud of its own, unique barbequing heritage, whether it’s the smokey and spicy Indian grill pit, the world-famous South American steak pits; the South African ‘Braai’ or even just the humble bangers and burgers of the Great British garden party.

This 200,000-year-old is certainly still alive and well, and shows absolutely no sign of slowing down.  Everyone loves an excuse to eat and drink outside in the sun, and this ages-old, somewhat all-encompassing image of human need for sociability will probably be around as long as we are!  But where do we go from here?

We started with the very ancient past, so it’s only logical that we end with the future of barbecue – the Lotus Grill!  When Zwoyer invented the charcoal briquette back in 1897, he probably never envisaged that his invention would one day come to a point where it could be carried to the park, and washed – without any hassle – in a machine built for the purpose of cleaning dishes.  But here it is!  The Lotus Grill is at the cutting-edge of barbecue technology and is portable, manageable, and absolutely no hassle to clean up!  The Taíno people spread the embers and the Lotus Grill is the fire that has built up after all these years; check out our Lotus range and enter the future of barbecue!